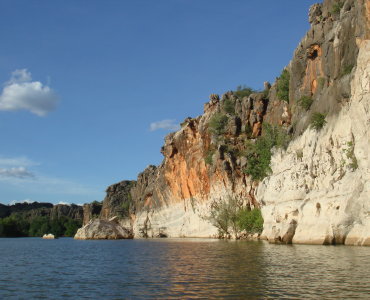 So back to our Pavilion for a cup of tea and a well earned goodnights sleep, yeah that’s what I thought no such luck mate I first had to dispose of a skink out of Joyce’s bedroom, and me being a sort of Crocodile Dundee in disguise, a Steve Irwin in the making I dispatched the poor little bastard so that my sister could get to bed. Amazing !!
Okay now the fun starts first we started with a day of rest getting to know our environment and the Broome shopping mall. So that was our first day in Broome. Our second day started early getting out of bed at 06.00 is not natural but “early to bed early to rise makes a dumb bloke that’s silly really bloody wise”. Off we go to Geikie Gorge, we traveled through iconic pindan country, past boab trees, towering termite mounds, Kimberley cattle and local wildlife, mostly drunk truckers ! first stop is Willare Roadhouse on the mighty Fitzroy River, where we enjoyed morning tea.
We then continued east, pausing at a magnificent boab that is well over a thousand years old, where we learn some of the secrets of this unusual tree, and see how tourists have defaced it as well. Further on, we journey through the Erskine Ranges to the historic town of Fitzroy Crossing before entering the ancient Napier Range, a limestone Devonian reef 350 million years old. Here we arrive at Geikie Gorge one of the most famous gorges in the Kimberley. Nature carved this spectacular deep gorge between the Geikie and Oscar Ranges during the Devonian geological period. Geikie Gorge floods during the wet season, with the swirling water leaving its bleached mark on the colorful gorge walls. Though the water retreats during the dry season, the flow remains to sustain the wide variety of Kimberley wildlife.
It is now 13:00 hrs and time for a picnic lunch. As we walk around waiting for our aborigine guide for our 2 hour cruise, we discover that even frogs use the toilet in the outback, very well trained but they look just a little bit green, it might be the water, smell or just their natural color, who knows !! it is now 14:00 and still no guide, so our driver decides to contact him but his satellite phone has no signal so off he goes to higher ground. It is now 15:00 and we are all just a bit pissed off, Christ where did our driver get to, probably back to Fitzroy Crossing for a cold one ! at 15:30 he has come back followed by the guide who is really pissed off, because he wasn’t contacted by the tour company that we were coming, so we had to decide to go back to Broome or take a one hour tour! And yes we take the one hour tour which was better than nothing, and the driver knew it that’s why he took his time to get back.
But the cruise be it a short one was worth it. Check out the photos ! so it’s now 17:00 time to head back to Willare Roadhouse for dinner , just lovely eating outdoors but Joyce didn’t enjoy it much sharing it with all kinds of bugs, form the very small to the huge ones at that was outside you should have seen the really big bastards in the toilets and I warned the ladies if you want a surprise and enjoy something tickling your fancy go there but otherwise avoid the toilets.
It is now 22:00 and we arrive completely knackered back in Broome. Bugger !!
What a start to the morning ! get of bed jump in the pool have a coffee wake up Joyce and get ready for a awesome ride on a trike. Yep a trike! Due to one of our tours being cancelled due to washed out roads so we opted for a tour of Broome with Roger owner and driver of Broome Trike Tours to get an insight into its colourful history, today’s Broome and the future. We visited Chinatown – home of the impressive pioneer monuments, the world’s oldest outdoor picture gardens as seen in the movie “ Bran Nue Dae”, historic Streeters Jetty, Broome’s Micro Brewery, Pearlers Row, Broome’s oldest pub, Sheba Lane, with its notorious past and the old Broome Lockup. Sitting high on the hogs over Kennedy Hill with its breathtaking views of Dampier Creek and Roebuck Bay.

We made a short visit to the Pioneer Cemetery at Town Beach, where Broome’s original jetty and “puffing Billy” tramway were located.

Roger also told us about the Catalina Flying Boat wrecks at the bottom of Roebuck Bay and continued on through “Old Broome” and into Demco Drive with its multi-million dollar homes and unique architecture, a reflection of Broome’s real estate boom.

Back on the road again, we pass through one of Broome’s newest housing developments, past the amphitheatre to Cable Beach with a photo stop too see how ridiculous someone can look on a trike without the appropriate gear on! Just check the photos and you can see what I mean.
Okay it’s now 13:00 when we arrive back at the resort after thanking Rodger and saying our goodbyes, “Goodbye”, it’s time to get back in the pool again to wash of the dust and cool my warm and tired body. At 16:00 we are picked up by Amy for our sunset tour on a old pearling ship the "Intombi" an authentic 105 year old Broome pearling lugger. We savored the delightful handpicked antipasto treats and tasty hors d’oeuvres and soaked up the stunning colors of Broome’s sunset while enjoying the tasteful but ever abundant VB. We tried to spot marine life but I think Amy and Ryan should have told the Marine Life too! 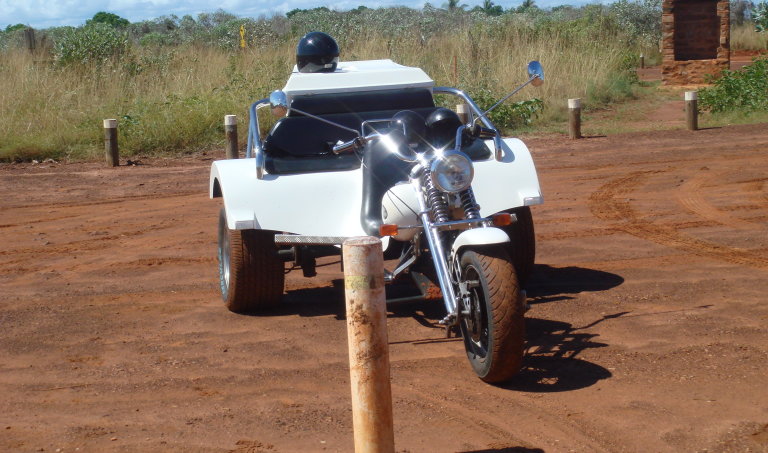 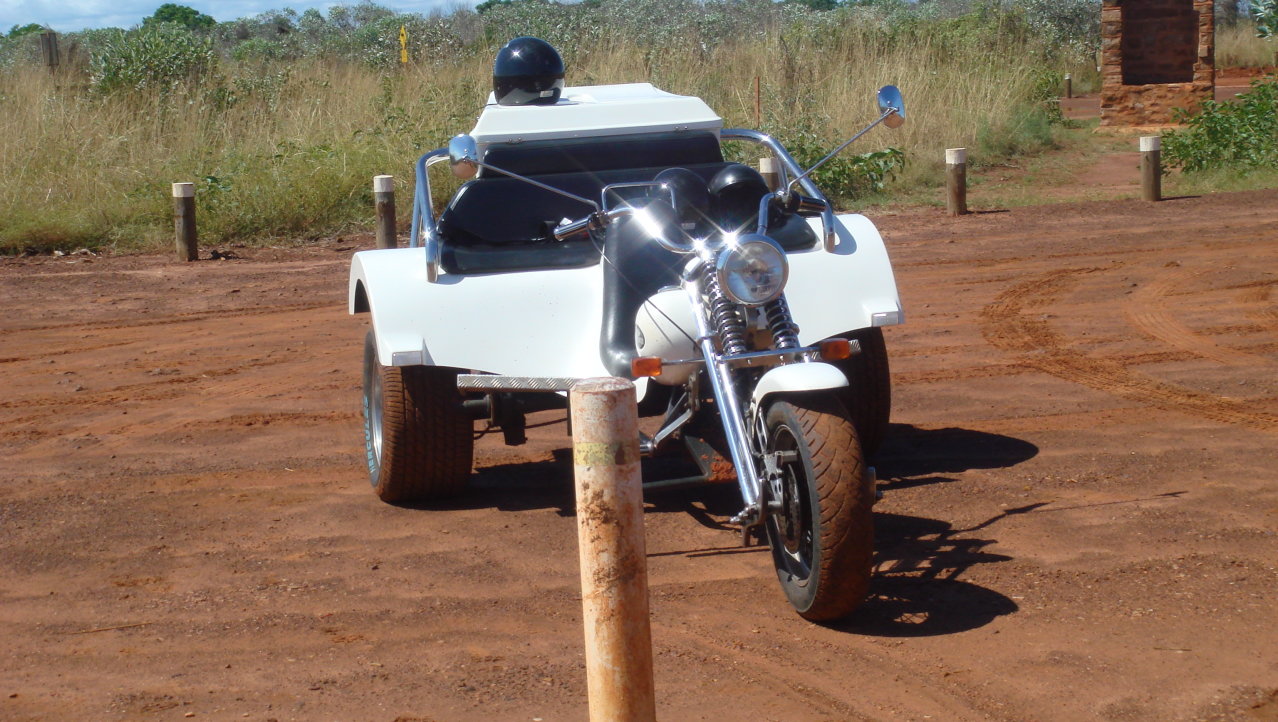